How to Get Alt Code for Telugu Font

In Telugu Typing many characters are not present on the keyboard, for type them we need some Alt+XXXX Code to type such a character. Actually the character generated with the combination of Alt and some numeric value the first digit is 0 after that 3 more digit combination it may be from 0 to 255.

It’s very simple to get Alt + Character on MS Word. In Telugu Font each character is defined with a code.

Steps to Get Telugu Alt + Code in MS Word

Step 1:  To get such a special character code goes to the Insert Tab on MS- word and Find Symbol Option at the right most option in Insert Tab. 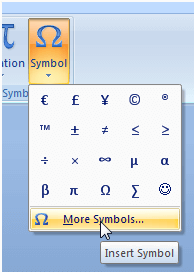 Step 3: It will open the window Symbol as shown below:

Step 4: In font drop down box select the Telugu font such as TT-Hemalatha Font and change the from Drop down box to ASCII (decimal) as shown in image.  Now you will see the entire Character map of the font.  Now select the character you want to see this code, and See the Shortcut key: Alt+0188 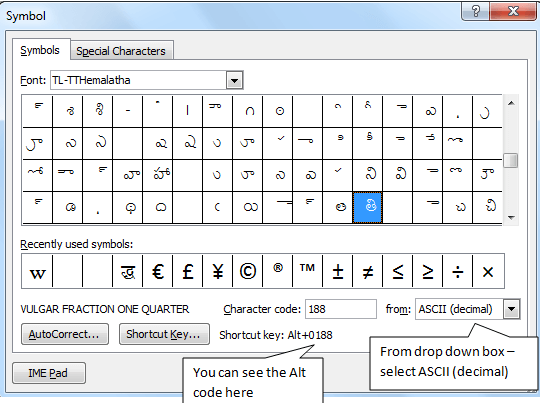 Step 5: Now you can see the Alt code  for any Telugu character you want on the character map.